We all know Ali Nilforushan – he’s been a part of the California equestrian scene for some years and can be a formidable force when defending his views. I caught up with this International rider earlier this year to find out more about his history as well as what’s on the horizon for this professional and his clients.

Dreaming of Horses
Ali has dual US-Iranian citizenship. Born in Tabriz, Iran, he started his riding career at the age of seven. After moving to the US at the age of 12, Ali continued his riding. “All I dreamed about was riding – no, I literally had dreams about horses – I’d close my eyes at night and imagine that I was on a horse galloping, and I knew, it was all I wanted to do.” After playing football and baseball (he excelled in both), Ali knew his passion would always be in equestrian sport. 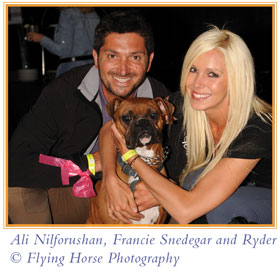 Later, Ali moved to Holland to train for three years. During his time in Holland, he qualified for the 2000 Olympics in Sydney as the first and only equestrian competitor for Iran. “That was quite an achievement” Ali explained, “I rode a horse that I got for nothing and people had written him off. We qualified for Sydney and made the Finals, which was incredible. Unfortunately, he couldn’t pass the second vet check and was unfit to compete. Even so, it was a thrill first to make the Olympics and then make it to the Finals. It was a huge accomplishment for my career.” Ali completed his pre-Olympic training in France and then spent one season post-Sydney prior to returning to the states to compete in the West Coast League.

Talk About Formidable
There’s a new horse in Ali’s life – his new prospect Formidable (barn name “Able”). After selling both his grand prix horses, Ali purchased the approved 6-year-old, Holsteiner stallion in December 2010 (Sire is For Pleasure, with Cartago on his Dam’s side). Rebecca Lewis of Lewis Circle of Horses, LLC also owns a percentage. As a four-year-old, Able was Champion of Verband in Germany. “He’s the best horse I’ve ever been around, talent-wise. I never imagined I would have a horse this nice,” said Ali of his well-bred prospect. 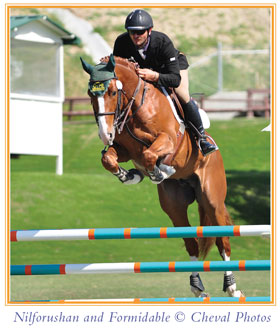 Able has competed in over 35 classes this year – of those, he’s had a total of three rails. Incredibly wise beyond his years, Able is just learning how to control his big body. “The biggest thing with him is that I have to take my time and let him grow,” Ali explained.

Standing at 17h, his bravery, his jump, and apparently his personality, are all as big as he is. “When you’re walking around, he’s like a trail horse. During warm-up I have to kick him, and the minute you get into the show ring, his barrel doubles in size and you have to sit dead quiet because he becomes a machine!”

Humbled by his Formidable partner, Ali continues. “He’s the real deal. The only thing you have to do is make sure he doesn’t jump you off. He thinks it’s the coolest thing ever to launch you into the air – he really likes to jump hard.”

Politics
Steeped in California culture, it is easy to forget that Ali is from another country, speaks three languages – Farsi, Turkish and English – and has family who live in a place that the United States is at times politically at odds with. Settled in San Diego and realizing his equestrian dreams, Ali stays clear of politics. “It’s very important to respect all cultures – I respect all cultures. I’m proud to be Persian – proud of my heritage, but I also respect who and what I’m around now. I leave the politics for politicians – if you’re a good person, it doesn’t really matter where you’re from.”

I inquired about Ali’s plans for his show jumping students. “We have a very good group of riders at the moment. It would be really exciting to see Francie [Snedegar] and Katie [Harris] get on a Nations Cup Team. I would love to get them on a developing riding tour to experience the international scene.” For these two “hungry and talented” competitors, Ali believes their experience in the international arena will refine them as riders and take them to the next level.

He continued explaining how riding and competing in Europe is a completely different experience. “The exciting part about competing internationally is that when you go over [to Europe] and swim in deep waters, you go to a whole different level.” Getting to that next level is every rider’s goal, and seeing progress (big or small) is Ali’s favorite part about this sport. “Watching the horse and rider progress and reach for the next training level,” said Ali, “I’m a believer that results come by a product of good work. I constantly push myself, my riders, and my horses because I was told a long time ago that it isn’t practice that makes perfect, it’s perfect practice that makes perfect.”

With a formidable attitude and a Formidable ride, the future looks phenomenal.