A Top Rider Mantra
Do we ride to win or are we winners because we have the chance to ride? There is more to the A-Circuit show life than training and competition. Losing sight of what’s important often affects performance in the ring as well as in life. We all enjoy winning; it is how we define it that is key.

With show season in full swing, I, on behalf of EquestriSol, wanted to take a moment to reflect, and get insight on the importance of attitude and perspective – not only during show season, but also in life. As many equestrian enthusiasts understand, training and competing on the A-Circuit has its challenges, but deciding whether to learn or become frustrated from those challenges is up to the individual.

One of the most successful hunter (and jumper when he decides to give it a go) riders in the sport, behind John French’s long list of accomplishments are his share of mistakes, bad days and not perfect results. Pictured below is one such moment when his mount Clooney almost jumped him off during the Handy Round of the Hunter Derby this past April. He recovered, smiling, and finished the round. Not even certain he was going to go east in May this year, French recently returned from the 2011 Devon Horse Show, where he rode Davlyn Farm’s Come Monday to the First Year Green Championship. 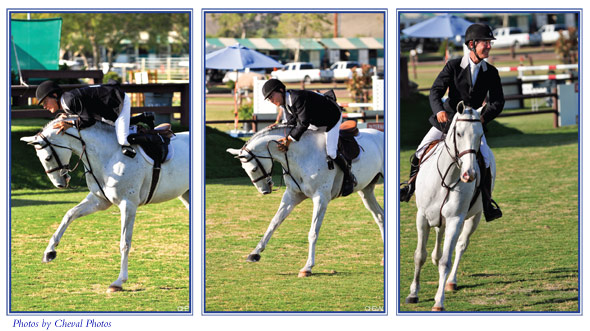 EquestriSol first spoke with John at HITS Thermal in March, where he was per usual dominating the hunter arena. And holding his own in Grand Prix ring, ribboning in several classes aboard River Bird last year and Mountain Home Stables Chawi Du Laubry in Thermal. The desert was buzzing when one day French not only flipped between highlight events – Hunter Derby and Grand Prix – he excelled. Jumping off his Derby horse, he stepped up his game to complete the jump-off for a top prize. 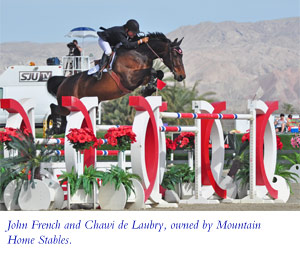 “I believe a lot in this horse; he’s not scared at all,” said French of Chawi. During the winter, he competed Chawi de Laubry in the several grand prix events while his owner, Taylor Siebel, was studying at Stanford University. French took 4th in $25,000 SmartPak Grand Prix (week V) and 9th in the $200,000 Lamborghini Grand Prix (week VI).

Finding French wasn’t difficult; it was waiting until he was on the ground and not on a back of a horse that was the challenge. Of course like many accomplished trainers, he has a number of clients and students that keep him on his toes when not in the saddle at horse shows. However, when I did have the chance to speak with John French, I found it to be a very calming, positive experience.

With all the success of his horses, as well as his students, one can’t help but wonder how this master maintains his happiness and sanity while trying to manage an incredibly busy show schedule, his daily training plans, and the never ending “to-do list” required for the proper care of his horses. When the nerves come in the warm up ring, how does he cope? What’s his philosophy or mantra for life that gets him through?

“Have an attitude of gratitude,” he answered with a smile, “Whenever I get nervous, I remind myself that it doesn’t help to be nervous about something I can’t control – a ride happening in the future – so I let go and focus on what I can control which is being in the present during the ride. I start to think about how lucky we are to do what we’re doing – winning is the main goal, but it’s not the most important thing.”

This relaxed and focused philosophy has brought him success with his horses as well as his riders in all arenas. His perspective in the midst of heavy competition is a positive example. “I don’t go out thinking that I am going to win – or that I need to beat somebody else. (I) just do the best I can – ride better than the last time.” Applying this approach to more than the show ring is undoubtedly something to consider.

Reflecting on why we choose to be equestrians, why we compete and how we handle the ups and downs of the ‘ride’, literally and figuratively, it would serve us well to think in the French frame of mind.

“Pick up the pace right away – don’t doubt yourself. To have a winning ride, you can’t think ‘am I going to find the distance’ you have to let that go. When you are tentative it interrupts the flow. Let the doubts go out of your mind – that’s when you ride the best. Take risks – believe in the ride.”

As we ride through life, it’s good to remember to go for it, believe in yourself and try to always maintain an attitude of gratitude. This makes you a winner.