Life can change in the blink of an eye. A phrase we’ve all heard, one most of us have uttered a time or two, but no one can recognize the truth of that expression better than Anthony Alfaro. In a split second one late February afternoon in 2007, events were set in motion that would see Anthony’s life change forever. There was fear, sometimes incredible pain, uncertainty, and countless medical procedures, but if you are expecting to feel sorrow and pity, think again. This is a story of a young man with courage, resilience, and an indestructible spirit.

Anthony is a “horse show kid” in every sense of the word. Nearly fifteen years ago as a young teenager he tagged along with his dad, Andy Burney, and began working on the ring crew at some California shows. He gained experience and knowledge and in a few years began working as a starter and announcer. Anthony’s good looks, sense of humor, easygoing nature and killer smile made him a favorite of exhibitors and staff alike and by early 2007 he was running a gate at the HITS Desert Circuit shows.

Late one afternoon he was driving back to the hotel with friends and co-workers, Arturo (Speedy) Dias and Zack Price. Anthony’s car was stopped at a red light. When the light turned green, he began to proceed through the intersection and the car was t-boned in the driver’s door by another car that had run the red light. All three friends were hurt badly, Zack injured his back and Speedy, his knee, but Anthony took the brunt of the impact and was in an instant fighting for his life.

Ask Anthony his recollection of the accident and he will tell you he remembers sitting at the intersection waiting for the light to change and his next cognizant moment was waking up almost a month later in the hospital. In that time, he had surgeries to repair damage to his heart, diaphragm, intestines, and trachea. He had no medical insurance.

After nearly two months in the hospital, Anthony returned home to Sacramento. He spent several months recuperating but in the back of his mind, he had bills to pay, a son to support, and he felt well enough to return to work in June of that year.

Everything went well for several months but by November he was starting to experience some back pain. He visited a chiropractor however gained little relief. By the winter of 2008 he was starting to experience knee pain as well. Without medical insurance, Anthony visited medical clinics regarding the back and knee issues. No additional tests were performed and while the problems continued the solution was to prescribe more and more medications. By the Pebble Beach Summer Shows last year he knew he was not getting better and he was in constant and severe pain.

By fall of 2008, he could not keep any food down and his family took him back to the emergency room. He was in the hospital for several weeks while they ran exhaustive tests finally finding that the material originally used to repair his aorta, (damage sustained in the car accident) was dropping off and traveling throughout his system causing blood clots in his stomach and both legs.

At that point it was back to the operating room, first for surgery to repair the original work on the aorta and place a stent and at the same time do some vascular work on one leg. Several days later the doctors performed another surgery doing more vascular work on Anthony’s other leg. For two months, this round of surgery seemed to do the trick yet soon his left leg was numb and tingling and his toes were beginning to turn black.

While advising Anthony that the only way he would get better was to amputate a portion of his leg, the doctors said they would not force him, it was a decision only he could make. He thought about it for almost two months before he decided to go ahead.

It would seem likely that the trials of the last two years would have created a bitter and depressed man, but nothing could be further from the truth. Anthony today is a man with no leg pain, in fact, no pain in general. He has been fitted for and is walking with a prosthetic leg. His face is free of traces of the distress that was his constant companion and when asked how he feels now his answer is just one word, “Grateful”.

Anthony is thankful for all the support he’s had from others in the last several years. “I’m amazed at the love other people have shown for me,” he says. 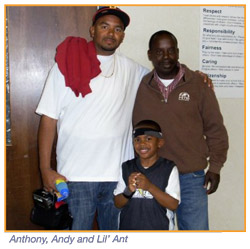 His grandmother, Susan, has taken care of Anthony in and out of the hospital. He says that she has made sure that he can recover and get back to life. “She’s made sure that I have no worries in my everyday life…food in the kitchen, no rent to pay.” Anthony currently lives with her and his son, Anthony (“Lil’ Ant”).

In addition, his dad, Andy, and his sister and cousins step in to do whatever is needed. Friends have been there from the beginning doing whatever they can be it contributions of money, time, or assistance. Anthony says, “Whenever I couldn’t take care of myself there has always been family or friends to carry me through. I couldn’t ask for more than that.”

The support from family and friends has been a great motivator. “There are so many people that didn’t give up on me, I can’t give up on myself. I won’t lie, there are times I just laid down and cried but I can’t give up. That would be letting down everyone, I would be spitting in the face of the people who helped me.”

Though he plans to work at a few shows this summer, Anthony has enrolled in college for the fall semester. “I grew up at the shows, it’s part of who I am, but I’m a father, I’m responsible for someone else. I guess this showed me I had to grow up and be a responsible adult,” he says with a grin. He also admits that he enjoys going to Little Ant’s basketball practices and weekend games as well as spending weekend time with family, things he’d miss if he were working full time on the show circuit.

There are still challenges ahead, there are monstrous medical bills to be paid and the legal ramifications of the accident will be addressed at a trial beginning in November. And though he is adapting to his prosthesis quite well, he acknowledges that the adjustment to his image in the mirror is slow. 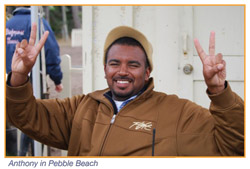 But throughout, that same word keeps cropping up. Grateful. “I just feel this was all a challenge to better myself, to be a better father, to support my son. I have no regrets. I just think this is something I had to go through to make me who I am. I have to learn to keep it simple, to be positive. I’m still sociable, I still go out, hang out with my family, I’ll continue to live life. All of this just added a couple of years to the original ‘life plan’.”

As someone that considered himself spiritually “in tune” before the accident, Anthony asked himself repeatedly why this tragedy ‘hit’ him. After listening to his story, it is difficult to comprehend the trauma Anthony faced and how in the wake of such an event, has been able to uphold a positive attitude. It illustrates that through all the painful challenges he has been given a gift, the gift of life and he receives it with open arms.